At the Dutch Festival 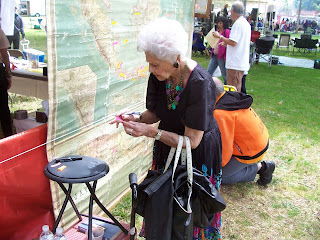 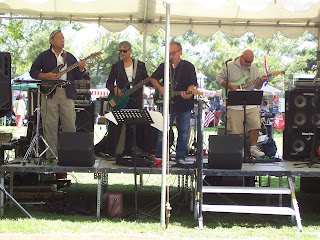 When I started learning Dutch, I never thought I would talk to anyone. In this region there are few opportunities to use it. Yesterday, I got to use it all day long. There was a high point, where I responded in Dutch, and I had understood everything. There was a low point, where someone who had been previously introduced addressed me, and I had no idea what was going on. Most of the time, I was 2/3 in and 1/3 out. I knew most of what was going on, but could rarely add anything.

The Dutch language is held dear by a group that came from all over. I was in line behind someone with ID from Nevada. For many, the festival was the end of a very long drive.

You never know where a language will take you. As long as you keep up with it, the road keeps going. Yesterday, I felt honored to work at the Indo Project's booth. I was the map guy for the morning shift. Jan had saved an old map of the Dutch East Indies from a trip to the dump. I was there with some pads of tags and some pens, encouraging people to mark where they were from.

While we talked, I explained how I got there, and held forth about how independence could have been much different under the 1936 Soetarjo Petition. Their stories explained long journeys, from the camps, when it looked like that was the end, to all sorts of destinations. The most moving story I heard came from a man who was separated from his family and found that he was an orphan at war's end. When the camps closed, he reunited with his grandmother, and they went to the Netherlands. She died there at 96. She had been through two world wars, but she couldn't take the cold. He felt that she had a few years left, but the inactivity and the changes were too much.

Another man, a Dutchman, said that he didn't belong in the Netherlands any more than he belonged in Indonesia, where he was born. I suppose belonging is a state of mutual acceptance. The Indo Project booth and the festival were very welcoming. Although many sad stories were told for the first time, the tone was happy. People were glad to see each other.

A continuous succession of Indo Rock bands set the tone. They used instruments taken from the Portuguese play hits from the United States in the early 60s in a genre that they had invented in the Netherlands. Everyone heard them jam in the here and now. In a sense, they pointed the way ahead.
Posted by P at 10:50 AM