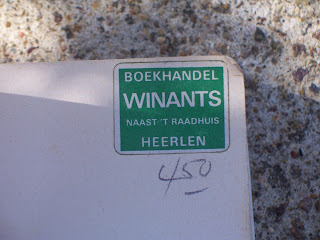 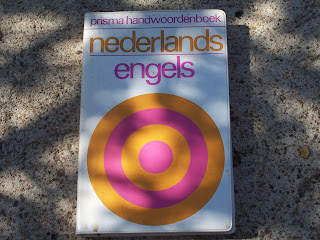 On February 14th, Wahrenbrock's Books in San Diego had its last day of business.


I bought this dictionary from them for a dollar. It is a twelfth edition, printed in 1975. The first edition was printed 20 years earlier. It is rare, in that it is a one-way dictionary, from Dutch to English. The only other one-way dictionaries I have seen are part of two-volume sets. It is much better made than the dictionary I have been using.

It turns out that the bookstore where it was originally sold is still in business.

This is a great dictionary for what I'm reading. Because it was printed in 1975, it doesn't have anything about computers, the internet or cell phones. That means that more archaic terms are still there, which helps a lot for a work about history.

The type is smaller than on the Routledge, but the guidewords are bigger. Someone at either Routledge or Van Dale (Who published earlier editions) was unclear on the concept of guide words. In my copy, they're the same size as the text.

More importantly, the 1975 dictionary was bound far better. It is much less likely to fall apart than the other one.

Both dictionaries are pretty good, but neither one is big enough for what I'm doing. I scramble around the internet a lot. They are the best I could find. If only there were a big LaRousse.
Posted by P at 2:12 PM