One thing that impresses me about Geert "Big" Mak is how well he writes about other countries. I can't tell if the Netherlands is that open, or if it's just him.

Chapter 3 closes with a look at England, France, Germany and Holland. In England, people retreated into their towns. Germany exploded, and a wild Berlin took over from Paris as the new capital of Europe. The Germans went whole hog for decadence, then started pining for order. The Netherlands had some upheaval. The royal family had an exit plan for a time. Still, it wasn't the wild swings that Germany had. There was a struggle for an 8 hour day. It even had a song, "De Achturenmars," "The 8 Hour March."

Again, Mak's writing is a useful contrast to what usually comes out of the US. The best writing about Mexico is American, but it's never been mainstream. I have never seen an American book about Canada, long derided as "USA North." Our history books are silent about our neighbors for long stretches. If Mak's mentality was American, other countries would only show up during wars, with the occasional foreigner stopping by to introduce a new pop culture phenomenon.

Now that most of my introductory material is out of the way, I will be away for a while. This blog will continue either once a month or at the end of each chapter. I have been reading De Eeuw van Mijn Vader since December 2008. I thought I would be faster by now. Reading a page takes 35-45 min. Each month, I'll comment on Dutch media I've heard and what I've read.

The next post will appear at the end of September.
Posted by P at 9:17 AM No comments: 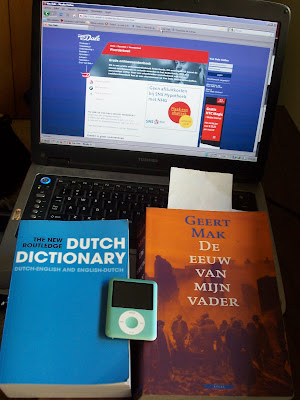 Here is what I use the most. The free dictionary is on-line. Instead of playing the same 10 songs and 4 commercials on my car radio, I plug in my iPod. To improve, I listen mainly to foreign language broadcasts. With the internet, you can learn any language.
Posted by P at 10:57 AM No comments:

How come athletes and musicians get all the good nicknames? Geert "Big" Mak!
Posted by P at 9:47 AM No comments:

VPRO In Europa: Geert Mak is the host of a series of audio and video programs that follow his book about European history. The intelligent calm discussions are really refreshing for someone from a land of shrieking know-nothings. I heard everything I could download. His segment on the English coal strikes under Thatcher had a lot of English language dialog. Mak is someone who wants to know, which makes the series worthwhile.

Katholiek Leven: When learning a new language, it helps if you go with a context you know. Being a lifelong Catholic makes this show more understandable for me than most. Fr. Roderick Vonhogen is a congenial priest who is also a fitness nut. The show had recipes every week for healthy foods. When he recites excerpts from the Mass, it really puts things together. In other languages, I have told my students to go to religious services with which they're familiar. Context puts it together. I listened to all 150 episodes.

Radio Nederland: This outlet has some great news programs, including Neiuwslijn Magazine Wereldomroep. (Newsline Magazine, World Roundup) I can understand a lot of the news summaries due to a common context, but most of their interviews just go right by. Radio Nederland was also useful for learning Spanish. Their Spanish language program is informative and features a wide variety of accents.

Cool Politics: I saw a short podcast covering this recent event. Some politician with white hair and sunglasses was received as a prophet, speaking before an event aimed at younger people. Instead, it attracted hipsters of all ages, the goatee and t-shirt people. The politician arrived in a golf cart. The whole thing looked really dumb.

Radioboeken: This is the hardest of my programs to understand. They feature half hour readings of works by their authors in front of an audience. It's very hard to tease out a context and get meaning. This program helps me tune my ear, but that's about it. This program and others like it show that the Dutch go out a lot to live events. Americans, by contrast, wait for perfect weather, then watch sports on TV.

Het Gespreek: This is an interview channel. The discussions are lively, but a problem in Dutch society is made clear right away: There is too much appreciation for American movies and music. Hollywood often produces a good product, but not all of it is high art.

Goede Zaken!: This show is from Oost Gelderland on Grafschaap TV. It's a roundtable discussion in which the sponsors get interviewed. "How's business?" "I'm glad you asked!" Sometimes the camera wanders off to show various processes, like transporting office supplies. This show is good for beginners, because there are many repetitive commercials. When I last saw it, there were many ads from a car dealer and a furniture store.

Film trailers: Meeste recente bioscoop trailers- This gives a good overview of what's happening in international film. Dutch subtitles over English language films help a lot. A word of caution though, not all trailers are "Approved for All Audiences" as they are in the US. Some European movie trailers get unnecessarily raunchy. Many Dutch movies never make it to the US. It's interesting seeing bits of what is unlikely to come here.
Posted by P at 9:04 AM No comments:

In December I thought I might go to Holland. I started learning Dutch through the media. Although that part of my trip fell through, I decided to keep up with the language and test my theories of language learning. I am a teacher and Spanish interpreter, who is forever in search of a job.

Before leaving it seemed necessary to do some reading. I started with language books from the library. For learning any language, British books are the worst. One book provided a lot of laughs with such useful phrases as, "Don't talk to me like a schoolmaster! Do I look like a schoolmaster?" I did five chapters worth of exercises in a book by a guy from Holland.

From there, it was time to get some real content. I started a search for Dutch authors. I thought that Geert Mak's De Eeuw van Mijn Vader (My Father's Century) would be a good place to start. Wikipedia said that he was a journalist. Reporters usually write in an easy to read contemporary way. I was expecting a short overview of the 20th century in the Netherlands that would be easy to read.

Geert Mak is Mr. Vocabulary. Often searches for words yield "Geen resultaat" (No results.) in Van Dale's online dictionary. Often his sentences are 10 lines long. Sometimes the words he uses are part of Van Dale's professional edition. I search for words in Google and also use The New Routeledge Dutch Dictionary.

One problem with books made in Europe is that they fall apart if you actually read them. My 400 year anniversary edition of Don Quixote from Spain was in pieces by the time I finished it. Similarly, my Diccionario panhispánico de dudas, is also falling apart. I had to send my first copy of my Dutch dictionary back, because it too fell apart. My second copy is holding up better, but we'll see for how long.

Most of this blog will be about Geert Mak's book. I will also report on other Dutch media, which I follow through podcasts. The blog will most likely end when I finish the book.

The Dutch media presents a self-image of the old Dutch stereotype. People are calm and businesslike. Conformity is a given. With that in mind, I wonder how Amsterdam happened. The Netherlands seems like an unlikely place to put the vice capital of Europe. Sure it's a port, but not all ports are like that.

The story of Santa Claus there is pretty interesting. At Christmastime I heard all sorts of songs about Spain. I couldn't figure it out. Using English sources, I found out that Sinterklaas chills in Spain, until coming to the Netherlands with Black Pete to visit all the good children. I suppose there's more to do in Spain then in the North Pole.

The book so far:

Right now Mak is describing the 1920s. It is very interesting to read about world events from a perspective I knew nothing about. For example, radio came to the Netherlands in a way that aligned with the 3 tribes Mak describes: Catholics, Protestants and Socialists. KRO, VPRO and other media powerhouses endure to this day.

One major problem Mak has is very common with his generation. He can't stand religion. As a result, he beats the Dutch Reformed Church to death. It was through Mak's book that I noticed this problem. I grew up in the US, just behind the same generation. They always had and still have opinions against religions I know well. Mak's book made me see his generational bias, because I have never had contact with the Dutch Reformed Church and have no opinion about it. In particular, the fundamentalist wing, with which his family broke away around 1900, bothers him. Consequently, all roads lead back to Abraham Kuyper. It's really distracting.

I was not aware that the Netherlands was neutral and made money during WWI. Mak points out that 19th Century thought wasn't swept away as it was in other countries. There wasn't a Lost Generation, and the ground wasn't fertile for Fascism or Communism.

My goal is passive comprehension of the Dutch language. It's about reading and listening. There are a few Dutch festivals in Southern California, but not much else.
Posted by P at 9:57 AM No comments: